The woman on the photograph is a wanderer staying overnight according to ”Allemansrätten” — freedom with responsibility.i

She is defenceless when she sleeps and therefore needs solitude to be in peace.

She establishes a temporary home in her sleeping bag.

Cecilia Parsbergs photo ”On Hold” is hanging high between two oak trees in Nääs Park. ii It is made with the thought that every human being -— 7.3 billion people — needs a home. A home is not only a physical protection against the wind and weather. ”Home” is also home feeling; here I can rest and be vulnerable, here the sky can open. What is a home for you? 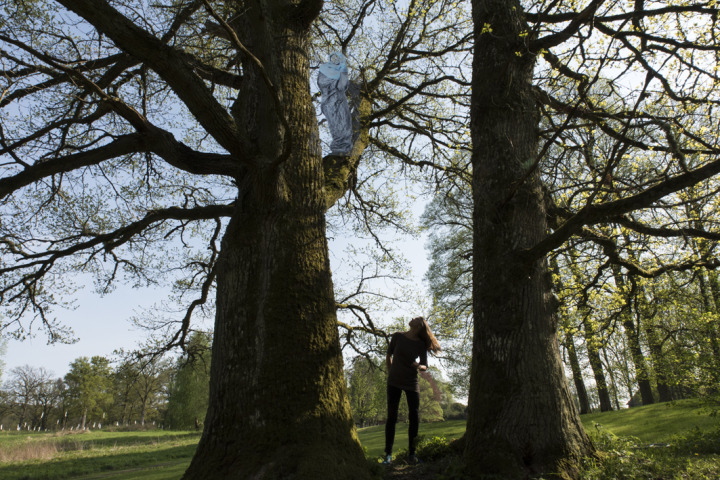 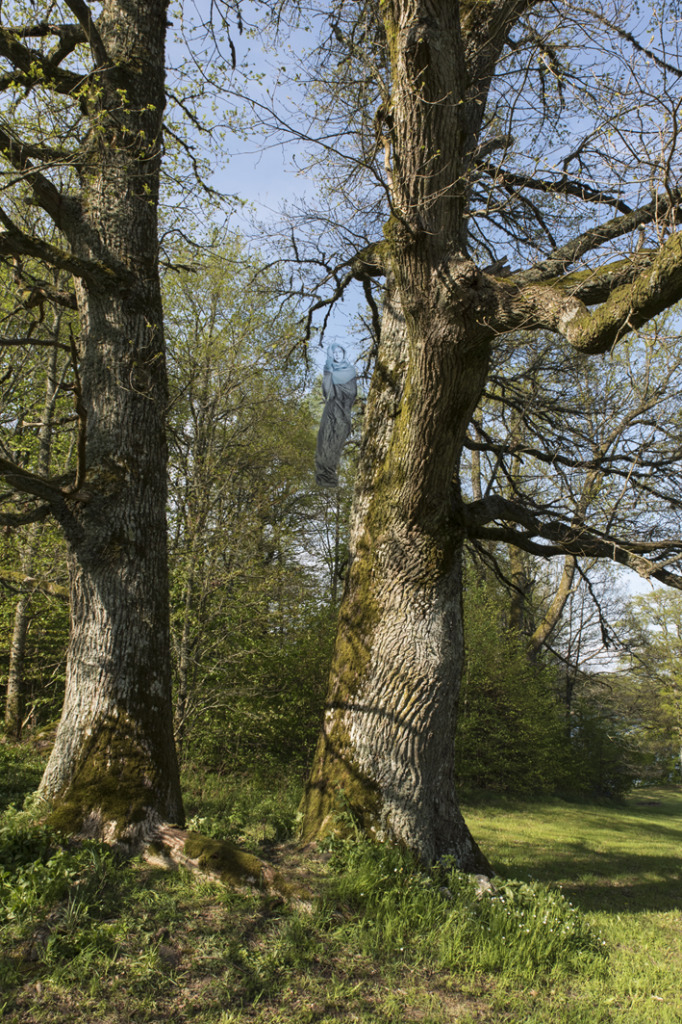 A story to the art work in Nääs park

When I received the exhibition assignment, I was asked to relate to an optional historical site/area along the migration route from Africa. I have chosen northwest Syria, in the outskirts of ancient Mesopotamia; the land between the rivers Euphrates and Tigris. Between Aleppo and Idlib, there are about 40 ancient Ancient cities designated by the UNESCO World Heritage Committee as a unique cultural landscape for its architectural remains of homes, pagan temples, churches, cisterns, bathhouses, farms, from a number of civilizations: the Sumerian, Akkadian, Hittite, Hurritan, Babylonian, Medical, Assyrian and Persian. For centuries, people have traveled to visit this cultural heritage, one could say that in places where we share historical heritage there is a universal right of ”Allemansrätt” — a Swedish concept.iii It can also be said that for the pluralistic west, public access to inheritance is an individual right. In the ongoing war, several of these sites have been subjected to destruction or are at risk of being destroyed by Daesh (IS). Today, many of these sites are defended by a multi-ethnic and multireligious alliance YPG that shares belief that good communities are based on pluralism and that different religions can share sensual images and values.

YPG’s brigade with women is called The Women’s Protection Units.v One of the female soldiers says: ”The woman has been suppressed for more than 50,000 years and now we have the possibility of having our own will, our own power and our own personality.”vi This statement is discussed within the scholarly community, there are those who claim that the woman has been equal to the man for a certain period in the mesopotamian cultures. British historian Amanda Foreman claims that during the Sumerian civilization, women had the same power as men. Priestesses and priests had the same power in the temples.vii The woman could study just like men and the laws also protected her; In marriage, the woman could differ and had her own property, and in the business world there were no restrictions.viii During the open and outward Sumerian culture, astrology, mathematics and the writing language developed 3300 BC. The Sumerians invented the wheel and the plow and practiced crafts such as weaving, leatherwork, ceramics, masonry and metalworking. 2340 BC when Sumer was conquered by the Akkades and when the Assyrian empire spread in northern Mesopotamia, the women gradually lost their rights in society and were excluded from the public.ix The first written law about veil for women is from this time. Violence against women was legalised.x The art of this era testifies to a growing patriarchal culture, women are increasingly losing their freedom, says historian Amanda Foreman.

Another one in YPG’s women warriors expresses why she defends her country, its historical places and what she wants to change: ”I see the Syrian revolution as not only a popular revolution of the people but also as a revolution of women .” These soldiers want to challenge existing structures between women and men, and to make new, more relevant ones. Their actions challenge the prevailing images of women and men.

When we live under similar conditions, common images appear, from (often) silent negotiations we make agreements on which images we will share. Visualizing communication on a sensible basis is often the artist’s mission. Can we more actively contribute to creating future images — express what we want in the future? These are questions that engage me as an artist.

v YPJ – The Women’s Protection Units, also known as Women’s Defense Units – is YPG’s female brigade, formed in 2012. YPJ consists of nearly 20,000 women who are fighting and make up about 40% of YPG. http://www.telesurtv.net/english/news/Kurdish-Women-Turning-Kobani-into-a-Living-Hell-for-Islamic-State-20141014-0072.html

vi Since 2011, under the Syrian people’s revolution against the dictatorship, several of the sites in the Northern Syria area / cultural landscape designated by UNESCO to world heritage were hosted by Islamic groups including Daesh (IS) who oppose reverence and the presence of holy places and holy places and systematically destroys them.

viii The information is from ” The Ascent of Woman 1 Civilisation – BBC Documentary 2015” https://www.youtube.com/watch?v=PPMocsqHnDo&app=desktop. The program is written by Dr. Amanda Foreman, who studied in 18th Century British History, at Oxford University in 1998. Foreman examines the world’s first laws founded in Mesopotamia. Here are questions about divorce, abortion and the use of veil. She tells, among other things, the story of Enheduanna, the world’s first-known author, and shows these writings.

x ”The 112 Assyrian laws that originate from the 11th century BC are in Berlin. Over half of them are about marriage and sex. ”(21: 40min).https://www.youtube.com/watch?v=PPMocsqHnDo&app=desktop