Those who hunger for life (Painting the landscape), dummytext performance and video piece 1994.

A performance in front of the videocamera (6:24 mins). I spurt the colours: White, yellow, brown, green, blue, red and black. Each colour is expressed differently. The act of spitting each colour is performed again in front of the camera and a series of 5 photographs is produced.

I was trained as a painter for eight years. In the history men have been painting landscape — overlooking it, viewing it, as well as overlooking the female body. The work is a play with the idea of/the image of/ the imagination that the female is more obsessed by the emotional, the interior…. Here the woman spits and spurts boundlessly, uncontrollably and soil sometimes the camera lens (the gaze) with color. 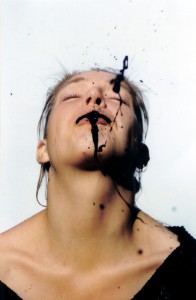 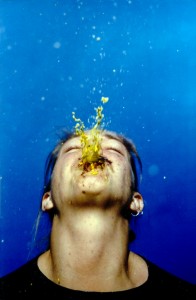