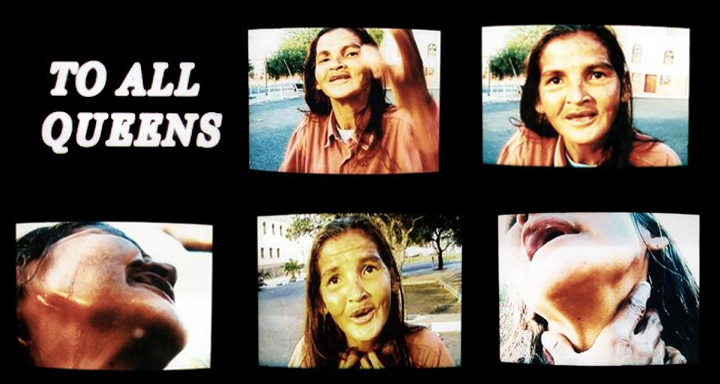 Video cover with stills from the video

To All Queens, is the name of an installation and a series of film seminars. Produced in May 2000.

I call the whole project an action. It was filmed and photographed 17/05 2000 in Cape Town, South Africa.
On the 14th of September 2000, the video To All Queens and a letter were sent to all royal Queens in the world. The action was published in the Swedish magazine OOTAL #2/3, 2000. Eight of the royal Queens answered my letter and these letters are also a part of the installation. The video is only shown in scheduled public seminars held by the artist.

The installation To All Queens consists of:
– An un-edited video To All Queens (see video cover above)
– The letter sent to each royal Queen in the world and the reply letters from the royal Queens – 8 out of 12 replied.
– A photo of District Six, where I met the Queen of homeless. (C-Print 2X1 m. see below) and info about District Six.
– A photo of The Queen of Homeless with King and friends (C-Print 2X1 m. see below)

Her Majesty Queen…
Queen of the Kingdom of …
Your Royal Highness

My name is Cecilia Parsberg, I grew up in Sweden. I live and work as a visual artist in London. During May and June, 2000 I travelled around South Africa. When I visited an area in the centre of Cape Town called District Six I met a woman. She came up and started to talk to me and my videocamera about her situation, being homeless, She said: I am the Queen of Homeless. Me, my King and my friends don’t have a house, we don’t have a shelter, I don’t even have ID. I am speaking for all homeless people and to you as a woman to a woman. Please tell them…

She saw my camera as a medium and a possibility. I filmed and photographed her, her husband and her friends. Many of us are born into a life situation that steers our destiny and this is usually the main obstacle for each individual in the search to find freedom. As an artist I make and intermediate images of what I percieve living in the society. I am sending this video to you and to all the Queens in the world. This video is her possibility to meet you and yours to meet her. Please find enclosed a videocasette with the title: ”To all Queens” as a gift.

This letter will be published in the Swedish art- and litterature- magazine ”OOTAL” together with some stills from the video and and a list of all the Queens it has been sent to. The video will exclusively be shown to the Queens and in my lectures.

The Queen of Homeless with King and friends

District Six
is the name of a former inner-city residential area in Cape Town, South Africa. Over 60,000 of its inhabitants were forcibly removed during the 1970s by the apartheid regime. On 11 February 1966, the government declared District Six a whites-only area under the Group Areas Act, with removals starting in 1968. By 1982, more than 60,000 people had been relocated to Cape Flats township complex some 25 kilometres away. The old houses were bulldozed. (see also http://www.districtsix.co.za/)