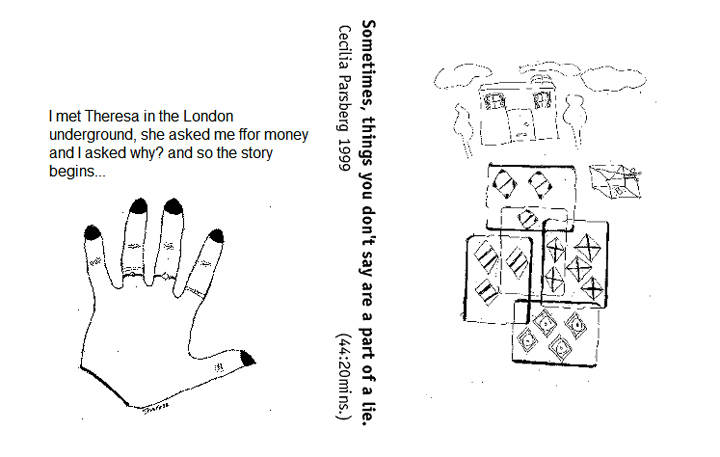 Sometimes, things you don’t say are a part in a lie.

The video is filmed in London during 8 months, 1998-99. It is about what’s happening with Theresa, with me and with our relationship during this time.

This is the story:

Theresa asked Cecilia for money in the street. Cecilia gave her some. They started meeting at cafés and became friends. Every time they met, Cecilia filmed Theresa without her knowledge. Theresa always needed money and Cecilia gave it to her. After several meetings, Cecilia told Theresa about the filming and that she wanted to make a video about them. Theresa said it was OK. They continued meeting, Cecilia paid Theresa by the hour for the filming and contacted the Social Security for her.

Theresa had a friend, Helena. One day, Theresa let Helena into Cecilia’s kitchen to give her some food whithout Cecilia seeing. Helena took some money from Cecilias wallet without Theresa seeing and left. Cecilia asked Theresa where the money was. Theresa said she hadn’t taken it and left. Theresa found out that Helena had taken the money. They had a fight and are not friends anymore. Theresa told Cecilia. Cecilia said she wouldn’t ask for the money back, but she didn’t want Theresa to let anybody into her home without her knowing it. Cecilia finished the film. Theresa and Cecilia still meet, always in Cecilias home because Theresa doesn’t have one.

When I meet Theresa she is 16 years old and she is homeless. She is from a small town in Ireland, she came to London a year ago with her parents and she ”didn’t like the atmosphere” at home, as she says, so she made the decision to leave home.

My intention was not to make a video about the history of a young Irish girl in London. This video is my answer to her question of wether I can give her money.