Multimedia square was a groupexhibition including: Peter Greenaway, Ben Vautier, Colin Self, Darell Viner, Jårg Geismar, Sachiko Odashima, Arni Gudmundsson, Tom Phillips, Cecilia Parsberg.
The exhibition took place in a stylish building in central London with security guards at the entrance. My intention was to bring the subject of mental gifts into this business orientated area. 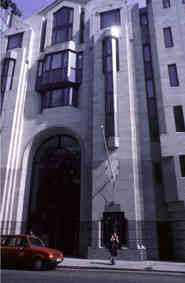 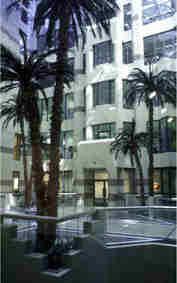 A piece made for the groupexhibition: multimedia square, Landsdown house, London June 1996.

I was present every day in a big open room. On top of the front wall I had put up the sign: Visting souls. I asked the visitors if I might try to draw their soul. I put the drawings (size A4) up on the wall as they were finished.

When drawing I used a simple system, I stuck to a given form, an outline of a torso. During the time I was drawing I looked into the eyes of the person in front of me much longer than I looked at the drawing and much longer than you usually do with a person you don’t know. The result depended on how much each of them agreed to have eye contact. When they looked in another direction I looked at the drawing. This was to maintain the concentration and create a drama of the situation, with respect.
The first visitors were disappointed; -Is this my soul? but when they saw that all of the drawings were similar, they started to compare them and read the small differencies. They also wanted to hear what I saw and how I interpreted them as personalities. Each drawing took about 4 minutes to make.

I was interested in commenting upon the situation when we sit in front of a doctor, therapist, medium etc; the need of being reflected by others and how one transforms and uses it. I also wanted to put people in contact with each other, the people who happened to be there at the same time. It´s a similar thought as the one I had in the concept of the exhibition: Who wants to be like mum and dad? 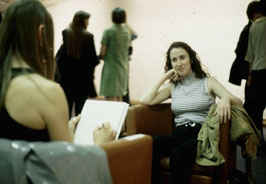 Performance by the artist and a visitor.