I can see the house (2 mins by Cecilia Parsberg) and To Rachel (20mins) a collaboration with Erik Pauser.
View both films here: https://vimeo.com/93608273

During March 2003 we filmed and photographed in the Occupied Palestinian Territories. In Rafah, Gaza strip, we met the ISM activist and US citizen Rachel Corrie. We stayed in the same house for a few nights. The house was close to the Egypt border and in the zone where Israel destroy houses to make a no-mans-land. They had bulldozered 600 houses. The families get ten minutes to pack their belongings when the bulldozer comes, they have nowhere to go, it is a desperate situation. Rachel was killed by the Israeli Defence Force while carrying out a non-violent protest against the house demolitions. USA has not yet carried out an official investigation of her death.

When we came home from Palestine we felt it was necessary to clarify some facts and mediate what we had witnessed. The two films I can see the house and To Rachel are about her and the situation in Rafah. The films are the first in a series of works: films, web sites, published texts, series of photos and installations. We are interested in the question how we connect ourselves here with what is happening there. 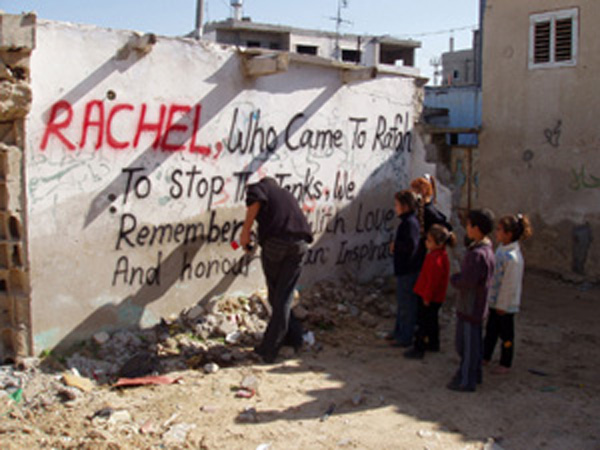