Joret Ed Dahab, means the hole where one can search for gold.

What’s in my power? As the human being I am, born into a specific life situation, in a country: Sweden, in my profession: visual artist… what do I experience, what do I see, what do I react on? How come there’s a feeling that ones time is not free? That freedom of thought doesn’t cohere with freedom of act. What is it like to be occupied by something that has been forced upon you? What happens a person living in a country that is occupied? It’s not just that the land you walk on, the air space above your head and the water resources, are controlled, but also your communication with others, those who are outside the check points where you need specific laisser passé to go to work or take your children to school… Also your movements of thought become limited. As Waleed, a friend in Palestine, expressed it ”My mind is occupied”, ”I have no time to think about anything else than survival”.

In December 2001 I went to Palestine for the first time, together with my colleague Ana Valdés, to – according to the invitation – make contacts and formulate ideas for a future cultural exchange. We have the belief that cultural arenas are spaces where different perspectives can be presented and discussed in another way than in media and in the political discourses. Last spring the emails from our contact persons in Palestine got more and more desperate. Ramallah was under siege, and now also Jenin was struck, they needed help and witnesses to what was happening there. Ana and I went to Palestine and spent April 20 – 23, 2002 in Jenin. In media one is informed about what is happening through numbers, but we met persons, of course. The counted dead and wounded and those who survived have names, they are somebody. They all have a name and they have relatives and friends.

In June we published a web site http://this.is/Jenin showing 450 photos, a number of recorded stories told by people who lived in the camp. There is also a detailed map on the site showing every house, which were destroyed and those possible to repair. Now, as I am writing this, more homes and quarters have been destroyed after several new raids

Even in democratic countries in peace it seems to be, and I wonder how come, a communication gap between people and the elected politicians, who have been given a mission and therefore can, change structures in the society. Do we really trust the ones we elect? Do the ones we elect trust us? The question is: Do we really wish each other well?

Seven Israelis dead and fiftyfour wounded in the blast of a suicide bomber in Jerusalem. An invasion of tanks in Nablus is the revenge, more dead, but now Palestinians. Everyone in Israel and Palestine has someone close who have been attacked. One month after the publication of our web site I get an e-mail from a man in Canada who asks me if I hate Jews. His e-mail is aggressive, I wonder if I really should answer it.

From: ”Daniel” To: ceciliaparsberg@yahoo.com Subject: Curious??? ”I was just curious why you don’t just admit the truth that you are Nazi scum? I’m certain if you had lived around 60 years ago you would have raced over to Aushwitz and Treblinka to join in on the fun. I hope evil cunts like you get cancer and have a painful lingering death.” He ends writing his full name and address.

I answered: ”Your mail to me is violent. Why? You are in Canada and have the possibilities to raise questions how we all can live together in this world. As my friends, both Israelians and Palestinians, I don’t exclude people because of their sex (as you do in your mail to me) race, religion or colour of skin. We can all live together if atrocities stop, violence is not used anywhere (so I think you should stop using it, to speak is to act). Cecilia.

Two weeks later he wrote to me again: From: ”Daniel”, To: ceciliaparsberg@yahoo.com Subject: My apologies if you construed my previous mail as violent., however….. My nasty e-mail to you previously was simply an example of the sort of visceral response I have towards people whom I perceive, in all honesty, as being very similar in certain key respects to people who tortured and murdered several members of my family. I was just curious why you don’t boycott people who do this: An explosion at Hebrew University in Jerusalem kills 7 and injures 80+. Police say the blast is a terror attack. Is it because you simply hate Jews????? Yours truly, Daniel.

I answered that I don’t hate Jews, that we all are individuals and we can’t accept to be packaged in groups like: religion, nationality and so forth and that there are many Jews who discuss this, for example the organization ”Not in my name” http://www.nimn.org . In war people become anonymous, but each of us have a responsibility for how we act towards our neighbour. Activists around the world organize, many of them young people, arguing and acting for human rights, that every human being should have the right to affect and change the life situation he or she is born into. I also wrote that I admired the organizations ”Bat Shalom” and ”Women in black” in which Israeli and Palestinian women cooperate and help each other to handle every-day-life situations, like: Israeli women meet up and take care of Palestinian children when they are going to school, so that they don’t have to wait for hours at a check point. I think these women should have a place in the politics because through their actions they show possibilities to solve conflicts.

During the nineties a slogan circulated: ”The personal is the political” and thus the general. My work was then about sexuality and borders between the sexes. Sexuality is one of our driving forces we use in our creativity and in contact with others but is acted out in a private sphere. Sexuality has become something we demarcate and often should hide. Sexuality is often exploited commercially, the Porn Industry is said to be the worlds biggest industry, and that is not strange, because the pornographic image is about something that everybody indulges in as much as they desire. But how can one allow an ”industry” to create so many preconceptions of the female and male body, or a state? Propaganda works this way, by creating images that occupies our mind until we make them our own.

How can I accept to become a passive receiver of this? In a society there’s a need for people who stir ”our perception” – the way we look upon things. The Porn industry would have too great an influence on the representation of sexuality if there weren’t other images concerning sexuality, in our education, at Maternity Clinics, in the Fine Arts, in the fashions and so forth. Within each of these areas images are made and they all reflect a contemporary understanding of sexuality. Images give us information, images reflect and speak to us. Suddenly all images of the photo models wearing wide jeans is being generally accepted and becomes a part of our conception of what we think is looking smart. In the same way we ”understand” a certain type of music because we are not alone and isolated in the listening, it’s played here, there and everywhere and we hear it unconsciously, get used to it and then likes it partly because we recognize it. We communicate with each other direct and indirect.

A contemporary artist has the power to connect the images made to the impressions images make, to see the relation to history, source, reference and visualize a future. These connections span a vast and limitless zone. (One has to be able to demarcate a certain area, a context, to be able to really understand and mediate what one sees, this is happening within each person.)

The title of my piece is ”Joret Ed Dahab, means the hole where one can search for gold”. The large photograph was one of the 500 photos I took in Jenin and the only one I took because I saw something beautiful. When we walked inside what was left of the house, passing a set of stairs, there was a remarkable light and I turned around to be in it. The light came through holes in the wall and ceiling and through the window I saw a landscape of houses, an infinite landscape of shadows and voices. The borders dissolved, the holes shone and I saw how fragile they were, all these borders we build on, as castles in the sand, traces of a game that is no longer played. Mohammed Abualrob has written Joret Ed Dahab in Arabic on one of the paper sheets. This is the original name of the place, the part of the refugee camp in Jenin, which was destroyed in the beginning of April 2002. Mohammed grew up in Jenin and he is since February 2002 studying in Uppsala, Sweden, in the course ”Peace and Conflict”. I have made a drawing of his text. These drawings are an important part of the work. I don’t know how to write in Arabic, it means it’s not possible to understand another person’s situation, but it’s possible to imagine or feel it. 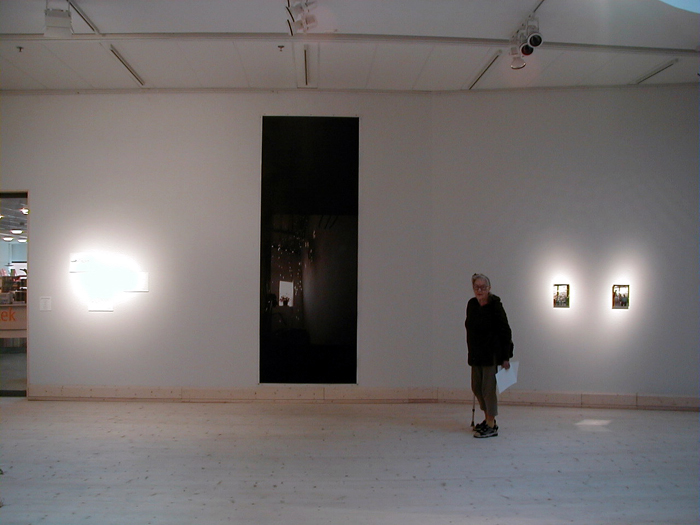 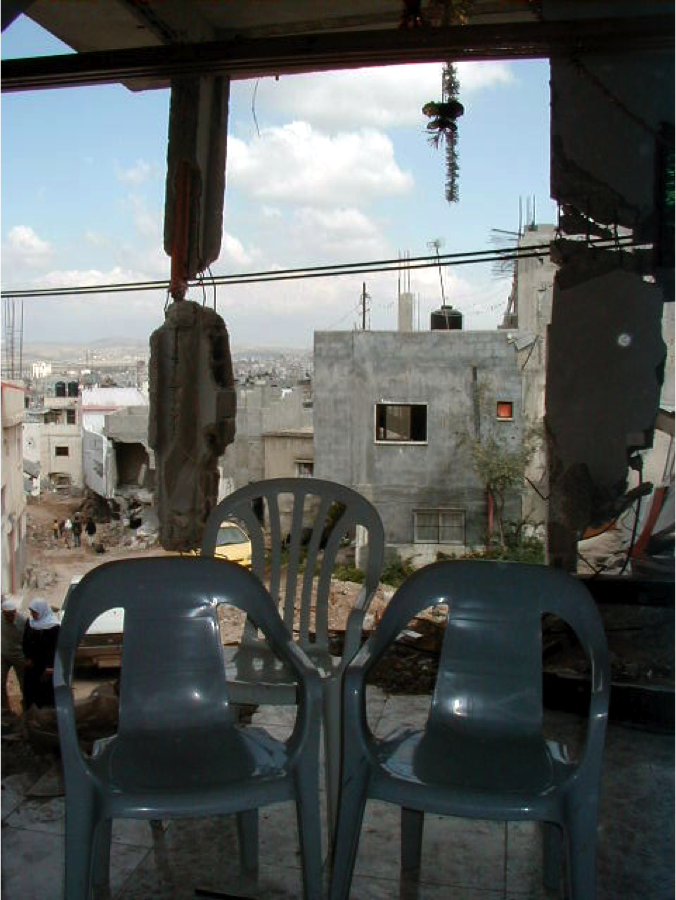 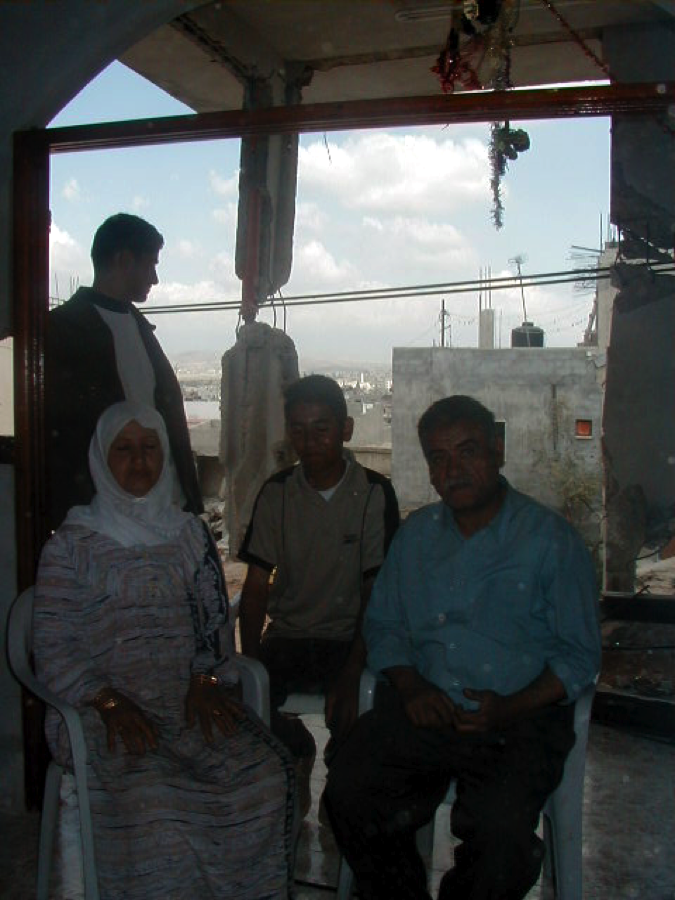